It has been a year since CAJA RURAL had started implementation of the Balanced Scorecard system using BSC Designer tool. Easy to understand but powerful software product became a perfect solution to organize the implementation process softly. Let’s check out the experience, AGUSTIN GARCÍA, the director of planning and control shared with us!

CAJA RURAL DE SALAMANCA is a big financial institution located in Spain. It provides a wide range of financial services including loans, credit card operations, savings, checking and many others. The company showed economic growth in the recent years. Dealing with such great number of activities inside the company and increasing number of customers, the top management decided to implement the system of Balanced Scorecard. After research was conducted, BSC was considered a perfect tool that could help not only to create a well organized structure of activities, but also to understand the company’s goals and perspectives and to make a realistic expectations and forecasts of the future performance growth. 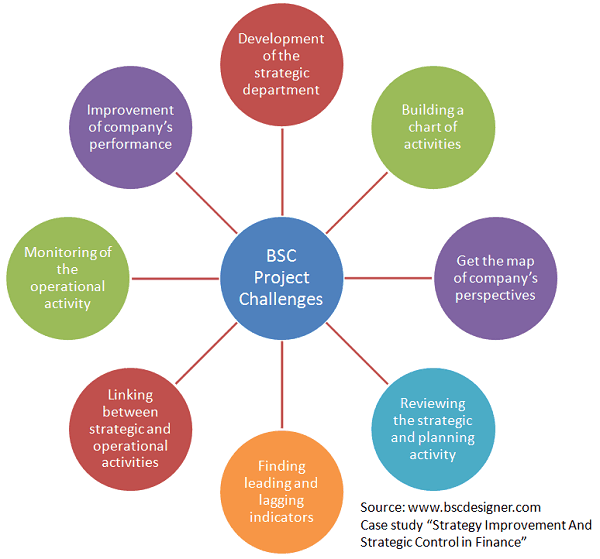 The process of localizing changes, mangers expected from Balanced Scorecard system to perform, already helped the heads of the company to better understand the entity of their business and its purposes. The four years plan of implementation consisted of lots of goals to be achieved, including:

As a department, responsible for strategy, planning and control department started to provide the implementation of Balanced Scorecard as well as choosing the tool, that could present a useful dashboard, saving time and resources. After viewing several dashboard programs, BSC Designer was chosen as a tool providing every function that was needed. Also BSC Designer appeared to be easy to use (that saved a lot of time of teaching personnel how to use the software).

After the dashboard had been chosen, the department of planning and control started implementation, centralizing the utilization of the program. The evaluated areas were commercial and marketing, Human resources, General Intervention, Investments, Organization and Data processing. The calendar has been adapted to the period of performance of each department’s actions. The time horizon is four years, but the actions of the department are in a year.

The director of planning and control became the one, which was responsible for providing the information to the program BSC Designer in coordination with a group of work that designs and realizes the follow-up of the Strategic Plan. The output information was used by the Headquarter and departments heads.

The technical support was realized in the department of planning and control: their function was to solve any problem that appeared along with email and telephone support service of BSC Designer. For example, one of the problems was the need of reports in Spanish; and it was successfully solved in several days.

Year ago, when the implementation process started, it was decided to use BSC Designer offline: the goals were evaluated periodically and revised by the working group. But the management thinks over the possibility to set up online functioning of the program, creating a network of dashboards which could improve cascading model of management and reduce the reduce and time wasted on providing up to date information.

As for activities and departments monitoring, the group responsible for BSC, proceeded to an analysis of internal processes in collaboration with department heads, bearing in mind the needs of the client and also had begun to receive, collect and analyze the information for Customer, Innovation and Learning and Financial Perspectives.

CAJA RURAL’s specialists used not only project’s tree model of BSC Designer but also some other functions the tool can provide. The most used functions were:

After a year since the starting date of BSC system’s implementation process, provided by BSC Designer as a dashboard, the company had successfully developed its strategic activity – the important management subsystem, letting the company know the direction where to move.

The department of planning and control, the team responsible for system’s implementation had reviewed the strategy, determining the strategic goals and their weights. Inputting this information to BSC Designer’s project step by step, the team had created a clear and exact strategy map. BSC had managed to transfer specific goals agreed with the vision of the Financial Institution. After that, the strategic goals begun to be translated into operational tasks with help of departments heads. The process of this translation is not finished yet, but the management has excellent expectations about it.

By now, the level of current implementation is for department of planning and control. All other departments are only starting to work under the system’s coverage. But BSC already gave some benefits to the company. For example, it allowed standardize the Strategic Plan of the Entity for four years. Also, together with the Strategic Plan and BSC, Caja Rural has made a strategic map that supports the actions proposed by each department. This is going to provide and evaluate the objectives of the Plan.

For a big company, it needs time to implement any system or application; even new calculator could be implemented for months. Balanced Scorecard is not something easy to implement, it needs a huge amount of work to link build BSC map and to link it with every subsystem of management. In other words, the entire management system should be overviewed according to the company’s strategy. BSC Designer is aimed to help the brave managers, who decided to implement this system, providing them with useful tools to prevent time and resources waste and make their job easier. After the implementation is over, the program can provide its maintenance, calculating performance values, organizing linking to the parts of database and atomizing the process of BSC functioning in many other ways.

More Examples of the Balanced Scorecard 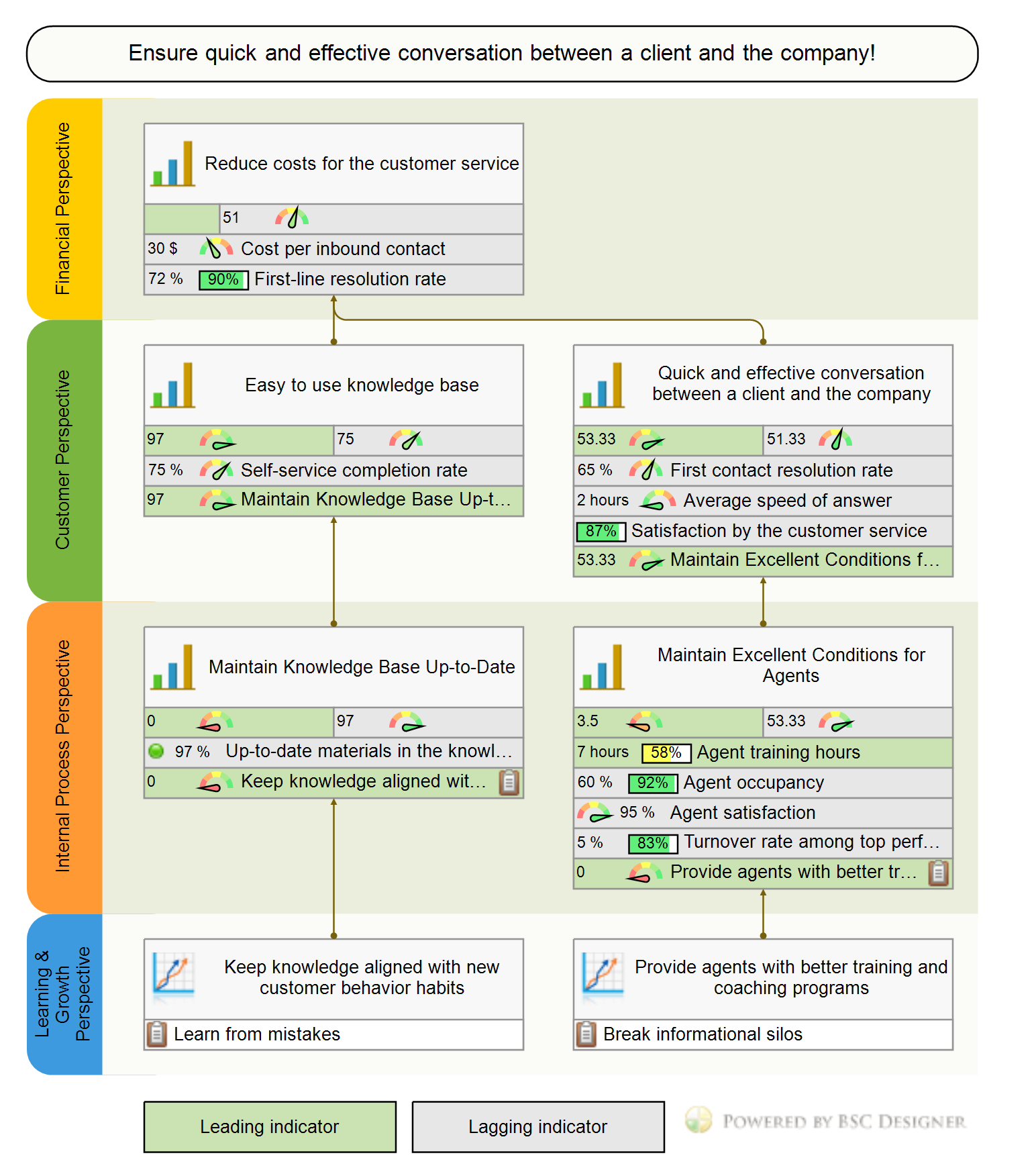 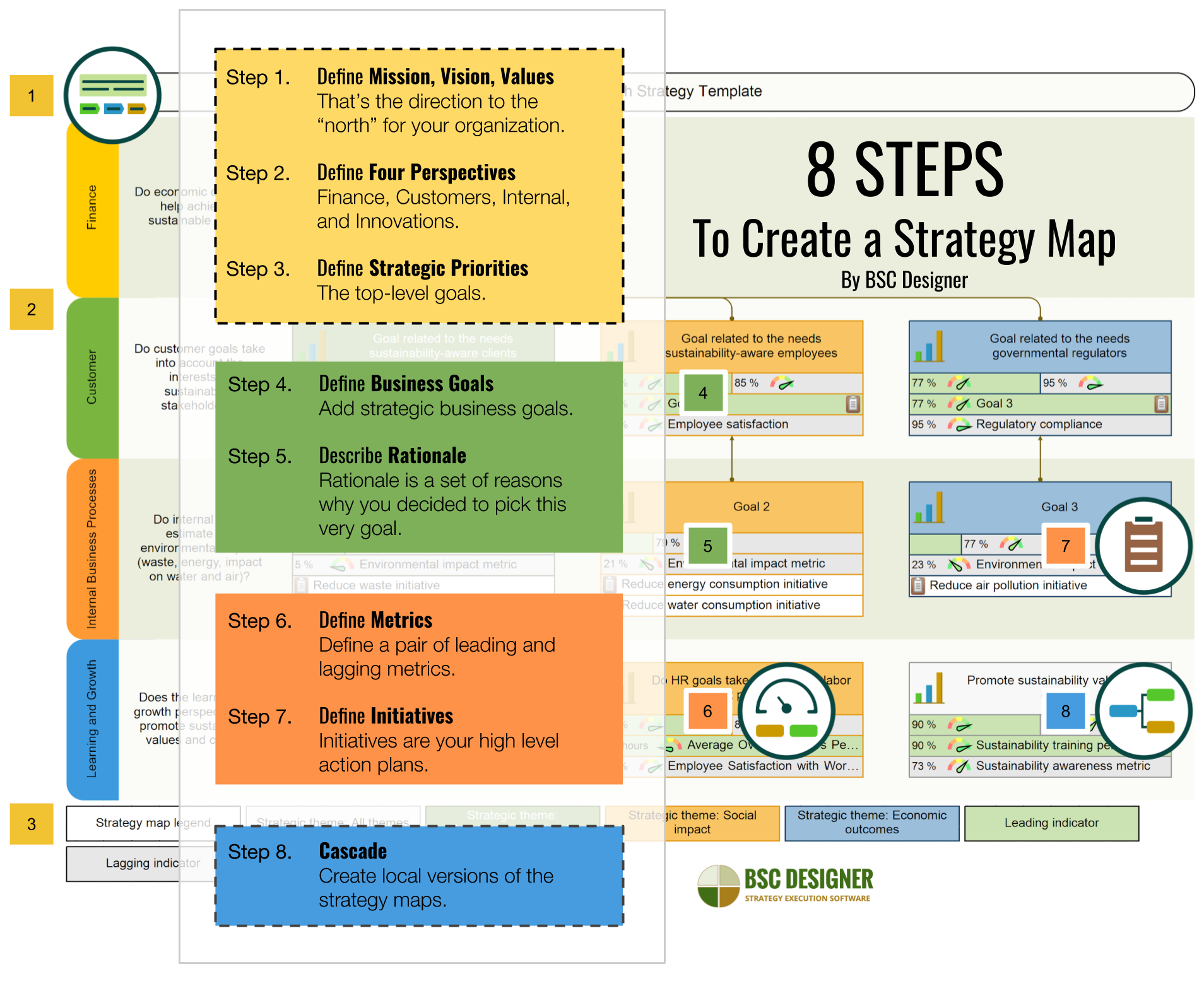 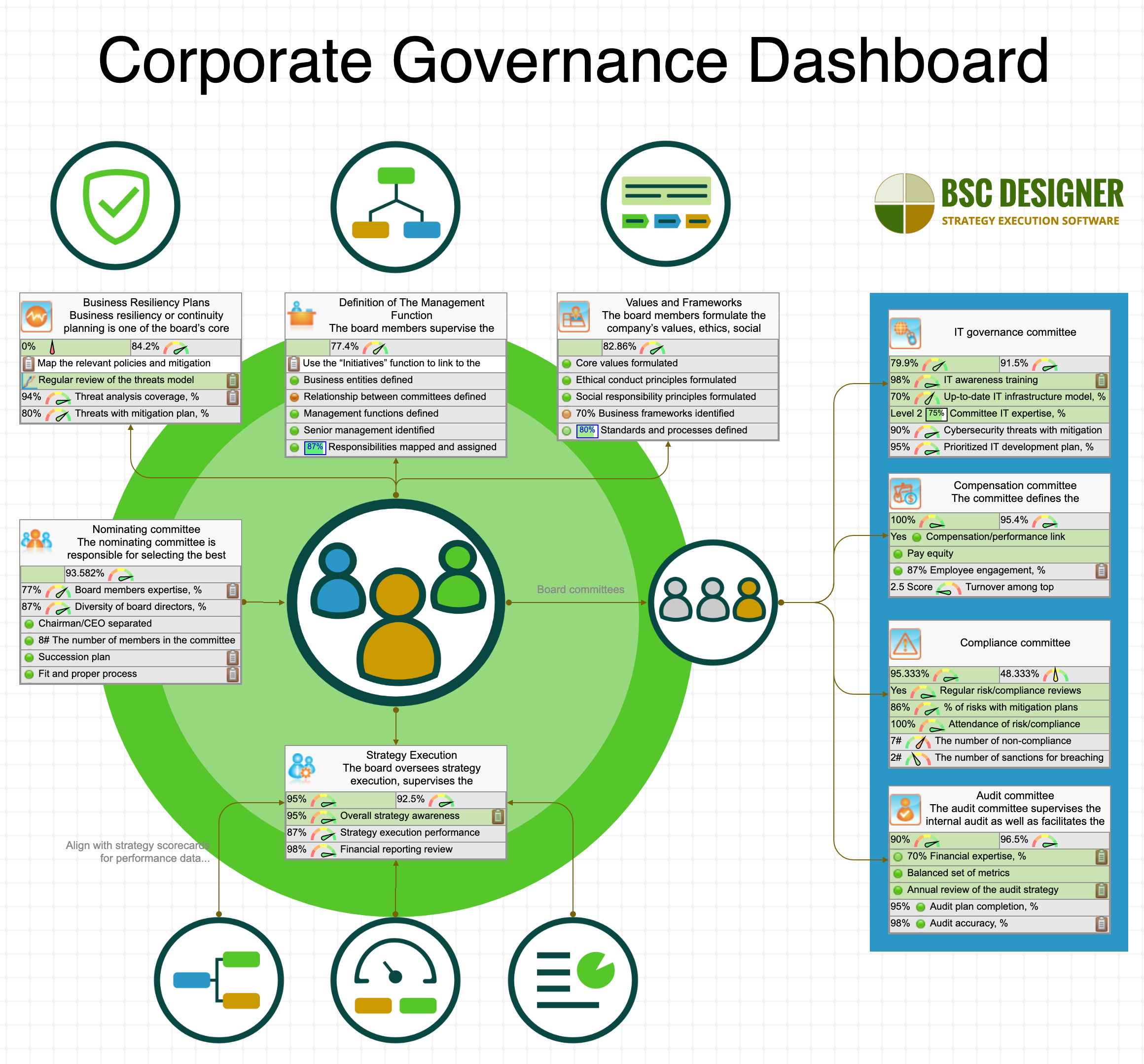