An example of using Porter’s Five Forces for strategy definition. Comparison to other competitive analysis frameworks. 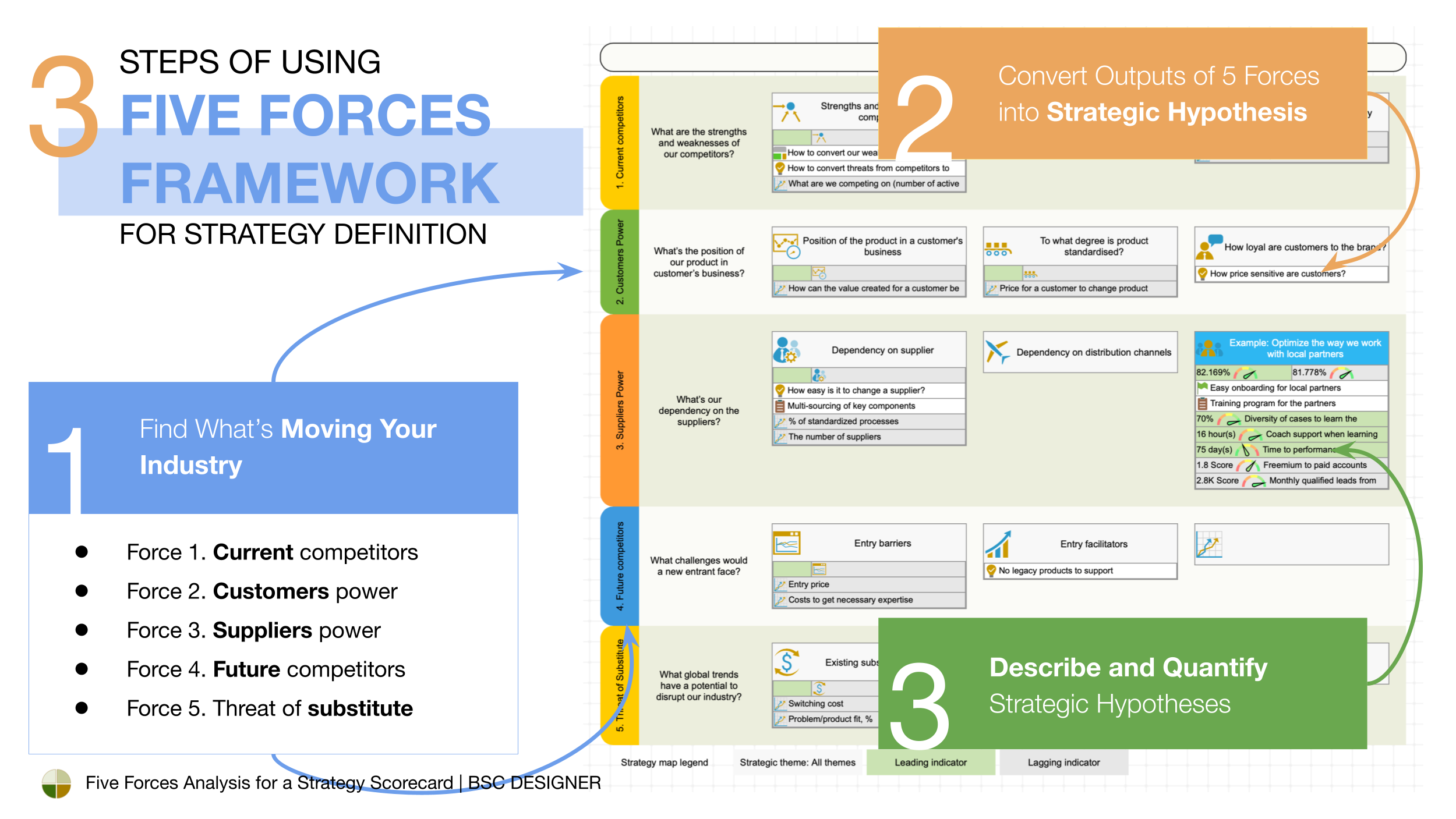 The topics of the article:

Traditionally, the market position of a company was analysed in the perspective of the existing competition. According to Michael Porter[1], only looking at market position within the prism of direct competitors is a too narrow approach.

A more accurate estimation of the market potential is a combination of the five basic forces:

In this article, we’ll discuss a practical application of Porter’s Five Forces framework.

The Role of the Framework in Strategic Planning Process

Let’s start with the position of Five Forces in the strategic planning process. Its application area is strategy definition (step 2 on the diagram): 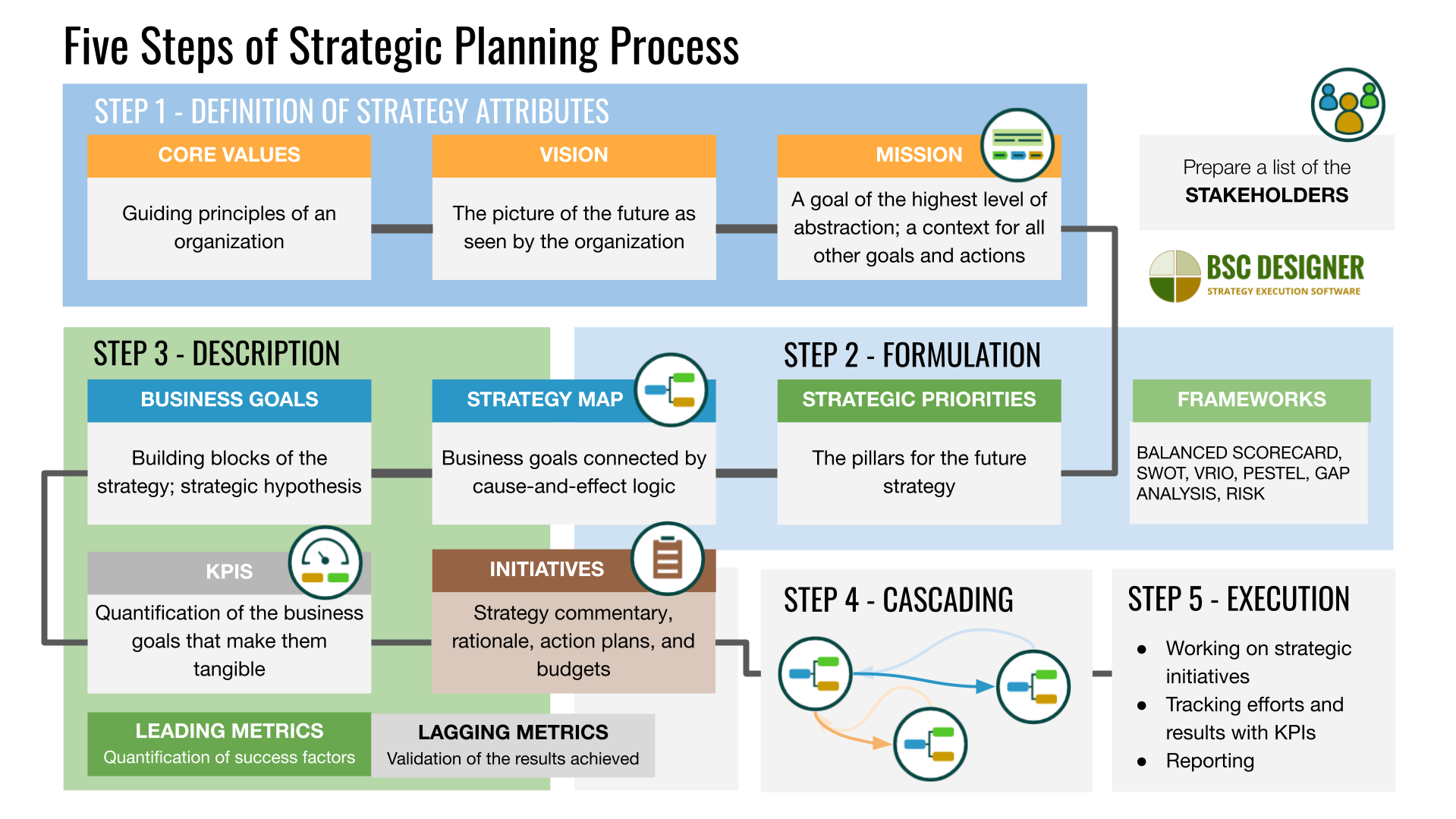 The idea behind the framework is to analyze the key forces that move an industry and develop strategic hypotheses and initiatives that would help improve the market position of a company.

Let’s see how we can use the Five Forces Framework in practice.

Below, we’ll discuss the three steps of using the Five Forces framework:

In Porter’s article, there is a phrase that I consider to be a simple formula for finding new factors or even new forces:

“the strategist […] must learn what makes the environment tick.”

The Five Forces are the starting point. The challenge for your team is to look at your company from the viewpoint of those forces and map the underlying factors that make sense for your company.

Most likely, the answer is “yes” to both questions (see some thoughts below about the 6th force). 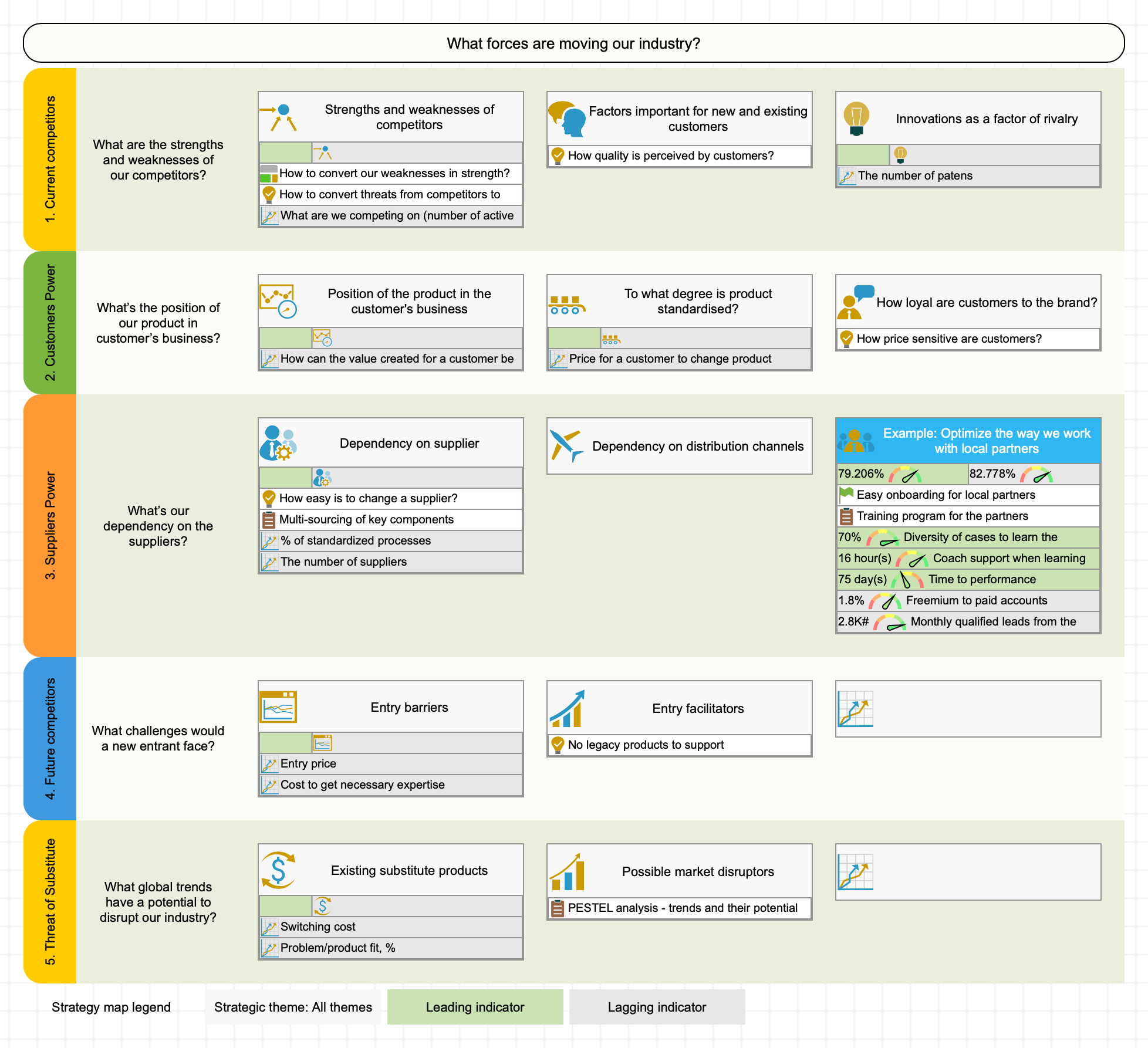 To help you along the way, our template includes some guiding questions:

Let’s illustrate how to use the template in practice using our company, BSC Designer (SaaS business in the domain of strategic planning).

Thinking about the “Suppliers” force in the context of our business, the “supplier” term doesn’t really work, because as a software company, there are no raw materials we use.

We can use Porter’s formula and find what’s moving our company in the sense of external dependencies similar to suppliers:

Let’s see what we can do about these insights on the next steps.

In the previous step, we added specific factors to each of the Five Forces. The next step is to:

Finding weak points and having a risk mitigation plan in place is less expensive than dealing with the same problem in crisis times.

We saw this scenario at the beginning of 2021. Due to the semiconductor shortage, many automakers faced supply problems. A more agile Tesla was able to mitigate the dependency on microchips effectively.

Let’s get back to our case:

Following the outputs of previous steps, we create hypotheses for the Suppliers Power force:

In strategic planning, a hypothesis is well formulated when the underlying factors were analysed, quantified via performance indicators, and action plans were suggested.

Once the strategic hypothesis is formulated, we need to follow the next step of the strategic planning process – strategy description.

The hypotheses should be converted into more specific goals, with such attributes as:

Let’s use this approach for one of the hypotheses found.

Goal: Optimize the way we work with local partners.

Rationale: Our success in local markets mostly depends on how local partners are effective in serving local customers.

Hypothesis: Investing in training for local partners will pay back in the form of higher value for customers and better economic outcomes.

The Five Forces template was used to formulate strategic hypotheses and describe them according to the strategic planning process.

The next steps include:

One of the less tangible forces is the force of substitutes.

Consultants like talking about existing substitute products, as it is easier to evaluate the risk of substitution based on the data.

How to leverage the risk of market disruptors?

What strategy will prove to be effective? It looks like most companies are aware of the coming changes, but as demonstrated by Theodore Levitt in classical “Marketing Myopia”[2], few are actually prepared.

My suggestion for an organization is to:

A more simple yet effective way would be to follow the examples of powers like China and outsource most of the hard work to sci-fi authors and wait for innovations coming.

Some authors add Complementary Products as a 6th force to the framework. Should your company consider this force as well? It depends on the nature of your competitive environment.

In the case of BSC Designer, a natural complimentary service for our product, are companies that do strategic consulting.

As mentioned before, in our case, instead of the “Suppliers” force, we have something close to “Partners,” so in our specific case, there is no need for an additional force.

We Are Dealing with Educated Hypothesis, not Indisputable Truths

At some point, the users of the Five Forces, SWOT or similar strategic planning frameworks might have an impression that such tools convert vague insights into indisputable truths.

The strategic planning frameworks don’t make the insights more trustworthy; they help to better organize them!

It’s important to understand that the outputs of the frameworks are educated hypotheses. It means that:

BSC Designer allows assigning weight to each of the forces as well as to each of the factors. If you prefer to have the performance within each force calculated, that’s the right approach to do it.

Such an approach helps to prioritize strategic choices:

When talking about forces, we often refer to the idea of dependency.

In the context of dependencies, it makes sense to analyze your business from the viewpoint of complexity (before, we discussed how to detect and quantify complexities).

Five Forces Compared to Other Frameworks

Before, we discussed the different tools for strategic planning. Among them, we have three frameworks that focus on competitive analysis:

Let’s see the advantages and application areas of each framework compared to Five Forces.

What’s the difference between Five Forces and SWOT? Actually, they complement each other.

With Five Forces, we build a competition model first. The framework prescribes the strategist to find underlying factors by looking at the company and its market from the viewpoint of Five Forces: 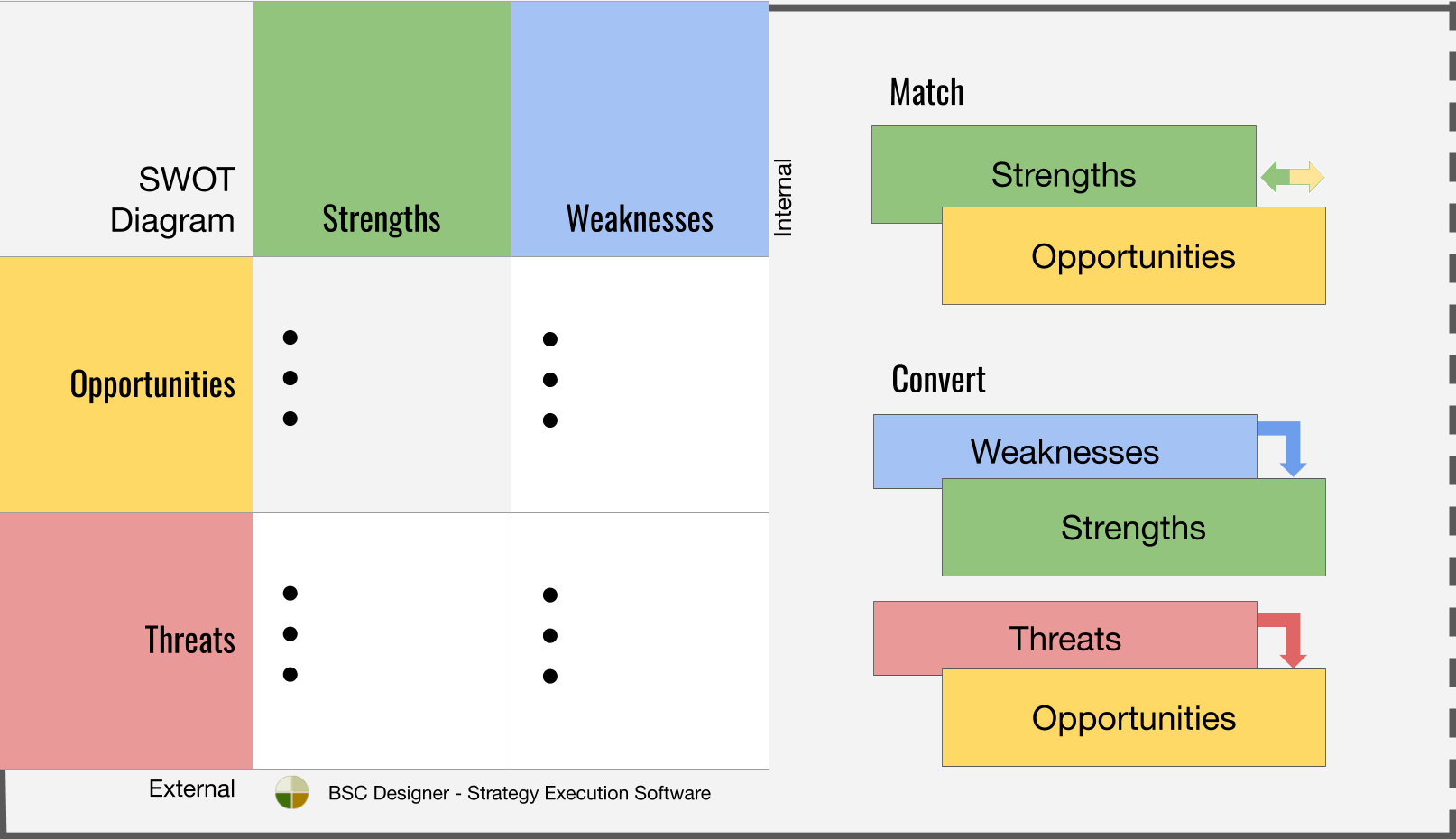 Once the initial analysis is finished, strategists can follow a classical SWOT process:

VRIO framework uses a different approach to the challenges of strategic planning.

With Five Forces, the analysis starts from a general competitive model to specific opportunities that the company uses to confront rivals. 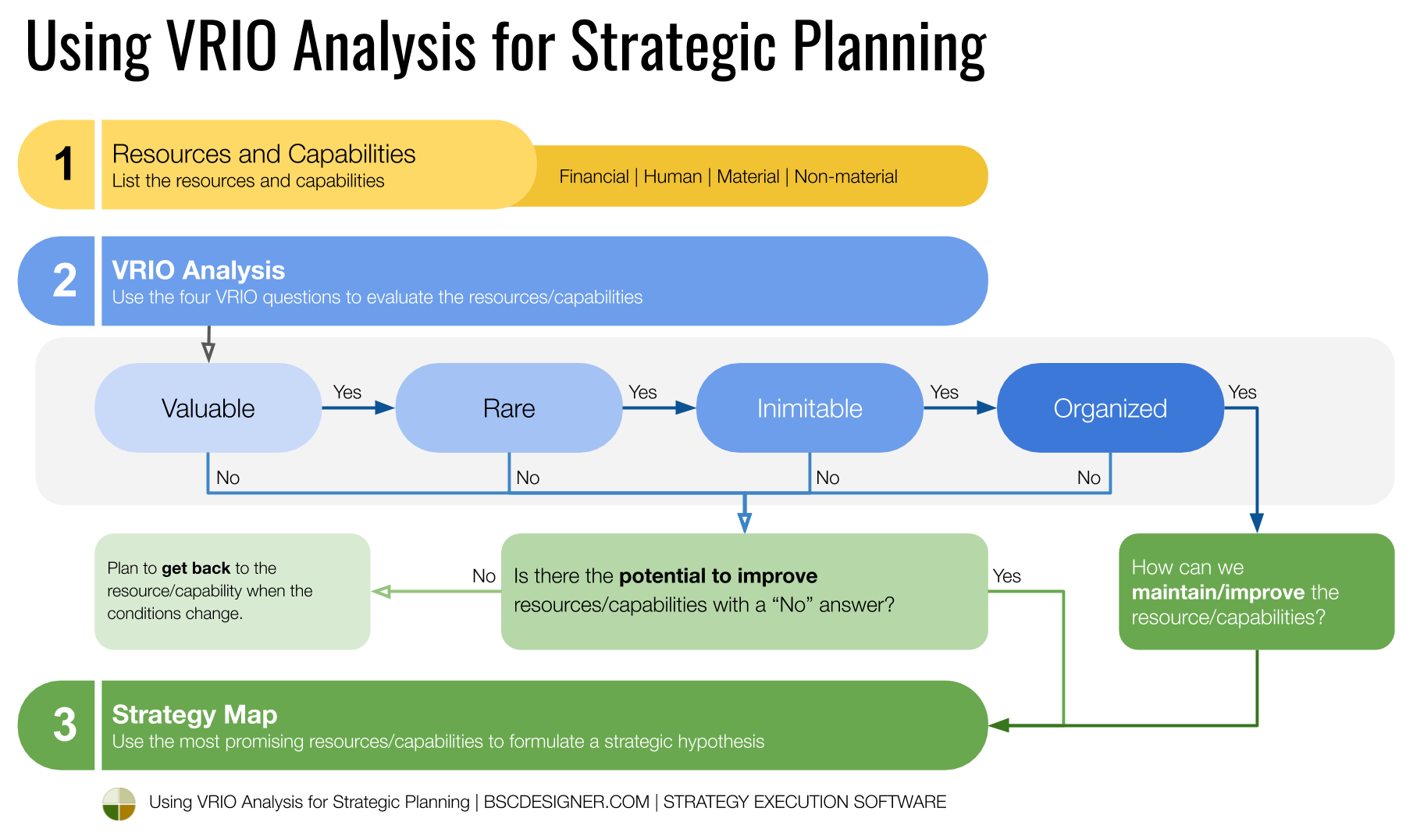 In VRIO, the direction is opposite; we start with specific “resources and capabilities” and analyze if they could lead a company to a general (“sustainable” in the terminology of VRIO) competitive advantage.

Another framework that resonates a lot with Five Forces is Three Horizons that we discussed before.

In contrast to Five Forces, Three Horizons looks at business growth and innovation planning according to three time horizons. 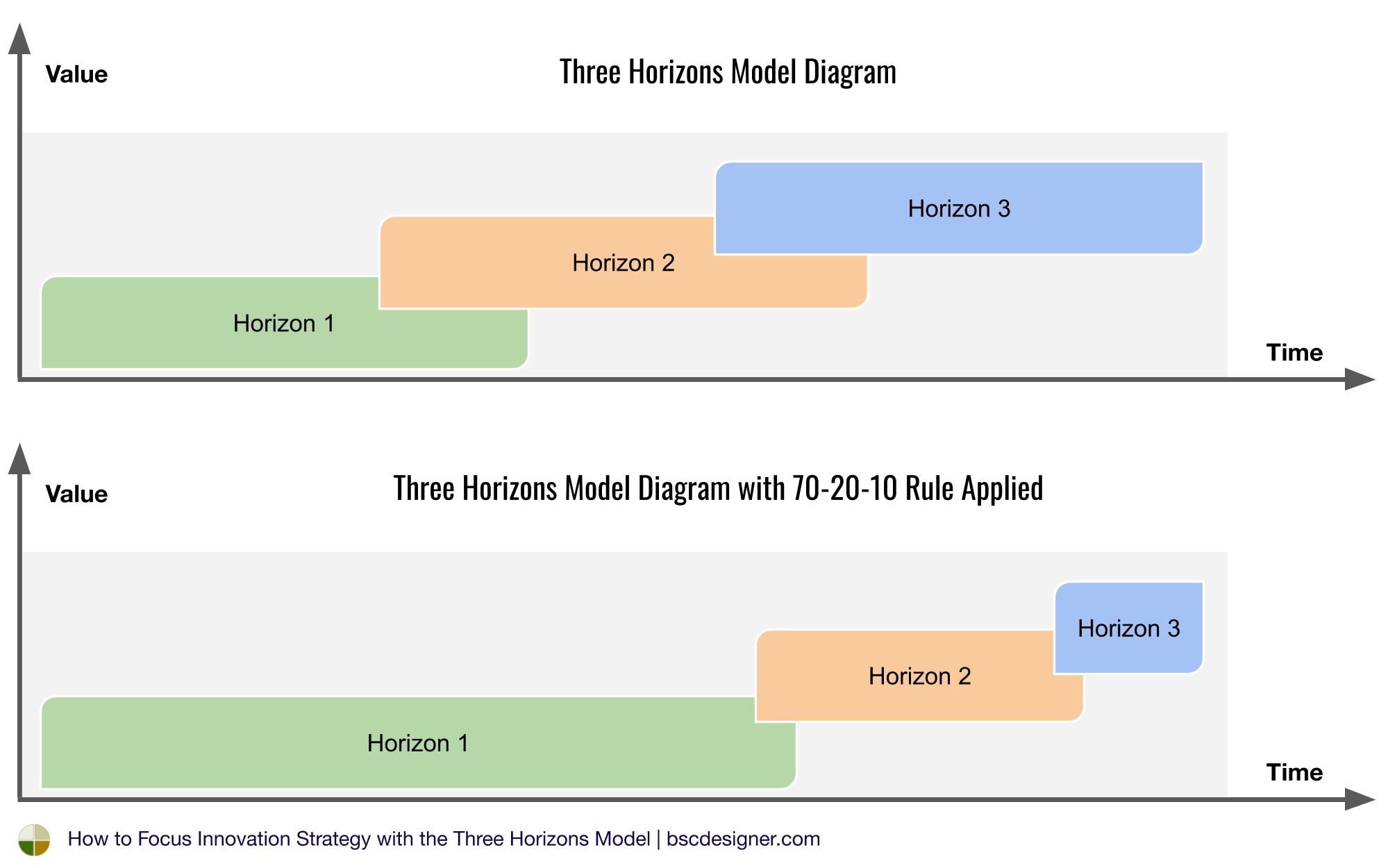 While the frameworks take a different approach, they actually complement each other:

The Three Horizons framework will be useful for prioritizing the hypothesis produced by the application of Five Forces.

The Five Forces framework suggests a comprehensive approach to the analysis of competition.

Instead of simply looking at the direct competition (the first force), four additional forces are taken into account:

We discussed an example of the practical application of the framework that includes three steps:

The framework was also compared to similar frameworks for strategic planning:

What’s your experience with the Five Forces framework? Feel free to share your thoughts in the comments. 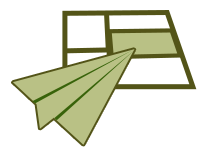 Strategy formulation and description might be a time-consuming project even for an experienced strategist. This Strategy Scorecard Wizard will make the whole process fast and intuitive.
Start now! 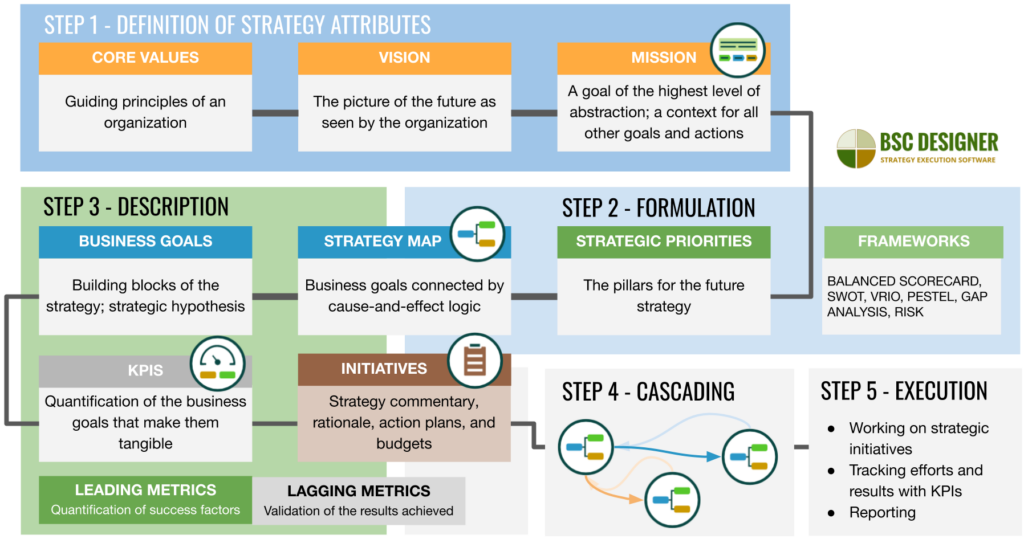 Examples of the Balanced Scorecard: 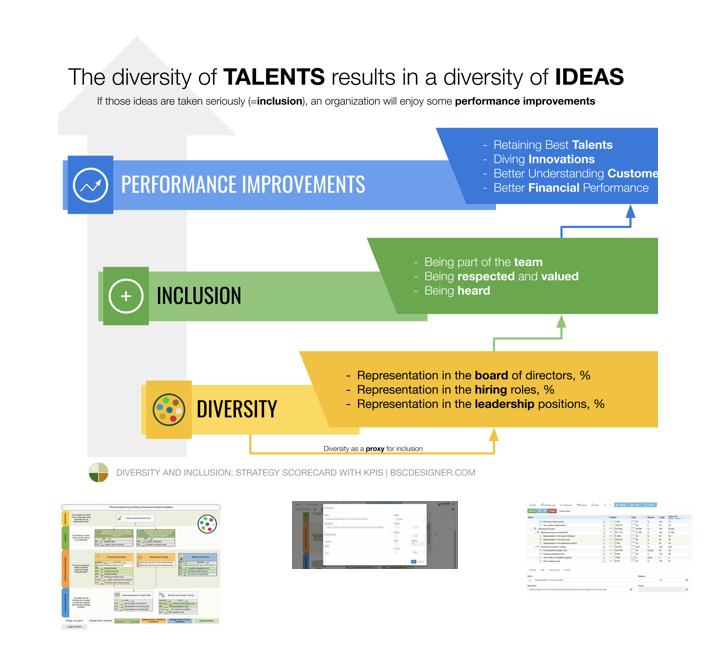 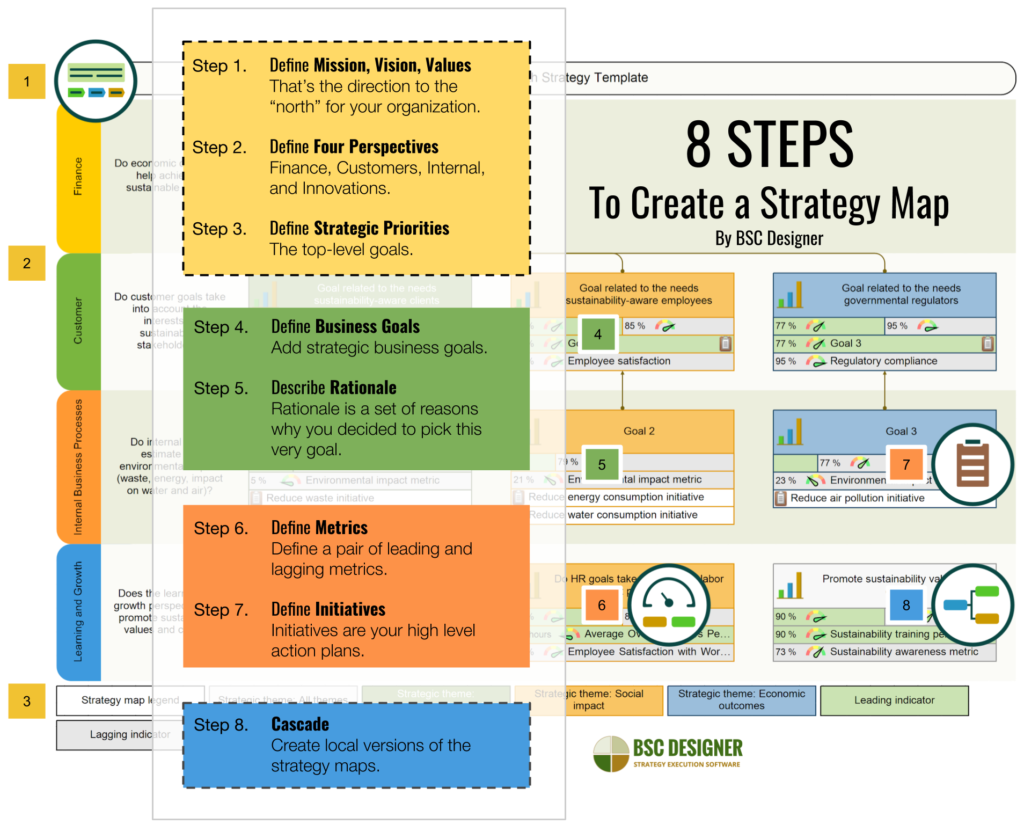 BSC Designer is a Balanced Scorecard software that is helping companies to better formulate their strategies and make the process of strategy execution more tangible with KPIs.